DISCOVER THE MORRIS AT HOME

Educational Blog From The Morris Museum of Art

Activity prompts, links, and resources to highlight ways you can engage with art education from the Morris Museum of Art.

Visit the full Morris Museum of Art’s site instead

Travel Memories with a Shanghaied Sailor

William O. Golding, Chefoo, China, 1939. Pencil and crayon on paper. Morris Museum of Art, Augusta, Georgia. William O. Golding was eight years old when he was on River Street (in Savannah, GA) and absconded to work on a ship. In a letter he wrote in his adult life, he and his cousin passed a ship called the Wandering Jew on River Street. He heard Captain William Potter ask his wife, Polly, to select one of the boys. She chose Golding, who was invited aboard and without his k
0 comments

Margaret C. Ramsey, a retired nurse, folk artist and storyteller, loved children and loved introducing the arts to them. She was one of the few local artists whose works were acquired in the early days of Morris Museum of Art. Her life was truly inspiring. Learn more about Margaret Ramsey and make your own unicorn artwork. Share at #morrismuseumoart Margaret Ramsey, Swing Low Sweet Chariot, 1985. Oil on canvas. Morris Museum of Art, Augusta, Georgia. Born in 1932 in a one-bed
0 comments

Folk Art in the Jungle

The Morris Museum of Art has a brilliant collection of southern folk art. Folk art is art that is made by those with no formal training and no adherence to contemporary or art historical trends. Lonnie and Twyla Money have several pieces in the Morris Museum collection. Their artwork centers on animals both big and small. Use our templates to create your own folk art jungle creatures. Share you art at the #morrismuseumoart Lonnie and Twyla Money, Untitled, undated. Painted wo
0 comments

Hunt Slonem is known for his patterned canvases filled with birds. His subjects are often based on his own personal aviary in which he has kept 100 different species over the years. Then use our printable template to cut, fold, and color your own 3D paper bird. Share your feathered friend at #morrismuseumoart Hunt Slonem, “Orioles”, 2012. Oil on canvas. Gift of Margaret Evangeline. Morris Museum of Art, Augusta. Georgia. If you've ever traveled to the popular Bryant Park in M
0 comments

April showers have brought May flowers, and the Morris Museum of Art has a beautiful floral still life to share with you. Scroll down to learn how to make your own bouquet using supplies you can find at home. Martin Johnson Heade is considered on of the most important American artists of the mid-1800's. His artwork focused on landscapes and still lifes. Heade was fascinated with South America and traveled there four times during his life, exploring islands and rainforests, an
0 comments

Mother's Day is this Sunday. Show your mom appreciation with a homemade pop-up card. Watch the video to see how it's made, then use our printable templates to get started! Share your homemade card at #morrismuseumoart Supplies Required: Paper, Scissors Glue Markers or Colored Pencils or Crayons (to decorate)
0 comments

Don't throw that coffee down the drain! If you don't have any paint, your cold coffee can become beautiful art. Your only color might be brown. But artist Eleanora Gibson Houston (1883-1942) demonstrates the beauty of a limited color palette. Eleanora Gibson Houston, “First Communion”, circa 1930. Oil on canvas. Morris Museum of Art, Augusta, Georgia Houston was a painter, women's rights advocate, and suffragist. Her artwork included portraits, landscapes of the Virginia coun
0 comments

During these last few weeks we have gotten to spend lots of quality time with our pets. The Morris Museum of Art has many artworks featuring our furry friends, but the most iconic is Sometimes I Feel Like a Blue Dog by George Rodrigue. If you were to draw or paint a portrait of your pet how would you show off their personality? What is your pet’s favorite thing to do while stuck at home? Share with us at #morrismuseumoart George Rodrigue, “Sometimes I Feel Like a Blue Dog”, u
0 comments

Battle on the Waters!

Imagine the day in 1862, when sailing the ocean changed forever! All thanks to the Battle on Hampton Roads! The Battle of Hampton Roads (or Battle of the Monitor and Merrimack) was the first modern naval engagement in world history. It was the first time ironclad ships (ships covered in metal armor) met in combat. Naval Engagement and Battle of the Ironclads are part of the Morris Museum of Art's Civil War collection. The two paintings were created by an unknown artist and pa
0 comments

The Morris Museum wishes you a joyful and safe Easter Holiday! Draw a rabbit using just your hand, paper, and a marker. Or color our art bunny! Share your Easter masterpiece at #morrismuseumoart Download Coloring Page Here
0 comments 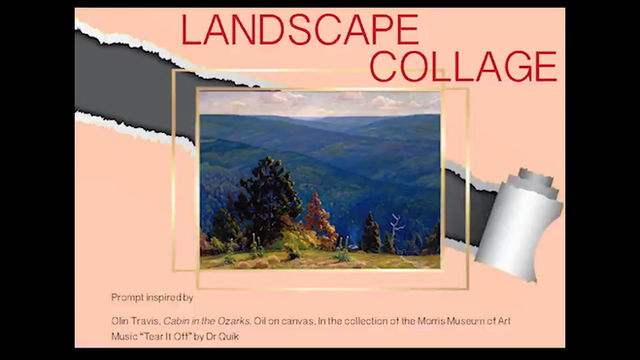 Rip Up Some Mountains

Come rip, tear, and collage a landscape with the Morris Museum; as we learn about the landscape painting Cabin in the Ozarks by Olin Travis! All you need is some colorful paper and glue. Share your artwork with us at #morrismuseumoart.
0 comments

Join the Morris' Education Department as we learn about Edgar Nye's painting The Bathers and create a salty watercolor beach scene inspired by the artwork. Share your artwork with us at #morrismuseumoart.
0 comments

News, projects, prompts, and programming from our education department staff at the Morris Museum of Art in Augusta, Georgia.